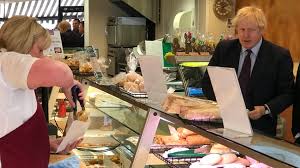 "My chances of being PM are about as good as the chances of finding Elvis on Mars, or my being reincarnated as an olive."

Chicken and mayo. That was my then lunchtime choice. Usually on white bread. Sometimes brown. I’d pop over to the sandwich bar opposite ITN in Grays Inn Road and it became something of a ritual.

All sorts of people frequented that little shop. Some you’d know. Some you wouldn’t.

One day I arrived at the door alongside a chap who frankly looked like Billy Bunter. A mop of uncombed hair. Scruffy jacket. And a vocabulary to match.

“Crickey,” he said. “You’re more famous than me. You’d better go in first.” This was my first encounter with our new Prime Minister.

At the time Boris Johnson worked around the corner and I was a regular national television face.

“That’s very good of you,” I probably said. Can’t remember my exact words. And we tumbled in together. Boris with hands pressed deep into his pockets. Me with no jacket but a tell-tale fancy tie with a big knot. Well, it was the 1990’s.

We exchanged pleasantries. Nothing grand. Certainly nothing in Greek or Latin. Just banter. He had a look in his eye as if searching for another joke.

This episode was repeated many times. I knew who he was of course. Not for one moment though did I think he knew who I was. Just a familiar face he’d seen on the box.

Our new Prime Minister doesn’t appear to have changed much in the intervening years. Not even sure he’s changed that jacket to be honest. But he was and is a character that somehow grabbed centre stage despite his “after you” behaviour.

Throughout my career, I’ve interviewed prime ministers, rock stars, film stars, sports stars. Never have I seen any of them in a sandwich shop or swapped idle chit-chat with them.

But that’s Prime Minister Johnson for you. He’s different. A one-off. A compelling character whether or not you approve of his politics or his private life or his governmental record.

The foreseeable future should be ………interesting.