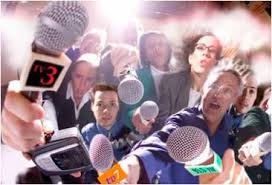 Me too or not me too? It's a big question!

I have a problem. It’s a difficult one. A challenge. Especially in the current climate. What to do?

Part of my time at Media-Vu is working with clients to help them make the most of every media opportunity. Whether it’s helping them benefit from positive coverage in the press or broadcast arena. Or limiting any damage when things don’t go to plan. I work in the real world. It’s the only one there is after all.

But here’s the thing. When coaching to manage your ‘performance’ on television or radio, and it has to be a performance by the way, your appearance and demeanour are key.

After 40 years as a media professional alongside being a ‘regular’ reader, watcher and listener I’ve learned what works and what tends not to work when it comes to communicating opinions in public. That includes appearance, body language and so on in addition to how best to express your message and the way you say it.

Like it or not this is how we humans interpret and process what others say to us. It's part of our decision-making. Whether or not it’s a conscious or subconscious response.

So how do I discuss these things with a client? It can be tough but not considered sexist when working with men. But what about dealing with women?

In our #metoo age, where misogyny and political correctness are rightly under the microscope how do you address the subject without causing upset? Or worse, offence?

It came home to me at the weekend when I was watching a politician being interviewed. She spoke well enough. Making her points in a considered and reasonable way. But we react to what we see before what we hear. It meant casual viewers, that is normal people if you like, would have missed her message because they’d have been pre-occupied by how she looked.

Her eyebrows, for instance, made her appear as if she were permanently amazed. She sported large glasses that you couldn’t help but focus on. And bright lipstick that…. well, you get the picture.

What to do? What to say? How do you say it? Should you say anything?

On this occasion, I was a viewer, not a coach. But I watch television as a media trainer. Her chance to make her case was wiped out by her personal appearance.

However, if I were advising her I would say it as I saw it. I would play the video back without sound to explain how most of her audience would have responded. And highlighted in an honest, diplomatic and rational way, why her performance on this occasion failed the media test.

Would it make me an old fashioned cad or even bully? No. If for example your engineer tells you the motor on your washing machine has ‘gone’ you want the facts. And then you want the same expert to fix the problem and make it work properly.

Media coaching is no different. And hopefully, the Media-Vu is acknowledged and respected in just the same way.

Thanks Graham, there is a lot to consider for sure, I think your the man to assist in avoiding the multiple banana skins

Very interesting point Graham. Personally I like to receive (as long as it's constructive) feedback. It's a very noisy marketplace and you need to be 'on point' if you want to be taken seriously and get your point across.